Question 3.
What is a node?
Answer:
Node is a point in a circuit where more than two resistors meet.

Question 5.
Define S.I. unit of electrical current.
Answer:
The current in a conductor is said to be one ampere if one coulomb of charge flows through a cross-section of a conductor in one second.

Question 6.
Name the regions of a transistor in the increasing order of their doping level.
Answer:
Base, collector, emitter.

Question 7.
Name the different regions of output characteristics of a transistor.
Answer:

Question 8.
In operating a transistor inactive region, how is the collector-base junction biased?
Answer:
Reverse biased.

Question 9.
Which property of a diode is used for rectification.
Answer:
Unidirectional property.

Question 10.
What is a NAND gate?
Answer:
NAND gate is a logic circuit whose output is low only when all its inputs are HJGH.

Question 11.
Write any two applications of an oscilloscope.
Answer:

Question 12.
Mention the expressions for
(i) frequency in terms of time period and
Answer:
Frequency = \(\frac{1}{\text { time period }}\)

Question 13.
Draw the circuit diagram of the RC low pass filter. Write the expression for its cutoff frequency.
Answer: A potential barrier is a small voltage developed at the p-n junction which obstructs the diffusion of the mobile charge carriers namely electrons and holes.

Question 15.
Obtain the relation between α and β of a transistor.
Answer: 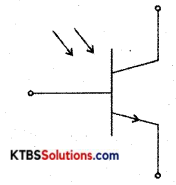 Question 21.
Find the currents in the following circuit assuming the diode to be an ideal diode.
Answer: Their capacitance value ranges from 1 μF to 0.01 μF with a vo1tag rating of 50V to 10KV. Electrolytic capacitors are suitable for high-frequency applications and ¡n radio frequency and microwave systems.

When a pentavalent atom is added, the four valence electrons form covalent bonds with neighbouring four silicon atom and its fifth electron becomes a free electron. The free-electron produced by the pentavalent atom does not create a hole.

The n-type material is electrically neutral because the number of free electron equals the sum of positive holes and positive ions.

Question 24.
What is a bleeder resistor? Mention its advantages.
Answer:
A bleeder resistor is a resistor connected across filter output so as to maintain minimum current through the choke at all times.

It is also used to

Question 26.
What is etching? Mention any two advantages of PCB.
Answer:
Etching is the process of removing unwanted regions of copper leaving the desired pattern of interconnections. Step 2: E2 alone is ON and E1 replaced by short Question 29.
For the Zener diode regulator shown, find
(1) load voltage
(2) voltage drop across the series resistor
(3) the current through the diode Question 32.
(a) Derive an expression for the effective capacitance of capacitors connected in series
Answer: Let the combination be replaced by an equivalent capacitor Cs which has the same effect as the combinations of capacitors. If C is the effective capacitance.
then V = \(\frac{Q}{C_{s}}\) → (2)

Question 33.
(a) Explain the charging and discharging of a capacitor in an RC circuit when DC is applied.
Answer:

The time constant can be defined as the time taken by the capacitor to discharge to 3 6.8% of its maximum voltage. Iron core inductors are used mainly in audio frequency applications and as filters in DC power supplies and in radio and TV receivers.

(b) Explain the working of the loudspeaker.
Answer:
A loudspeaker is a transducer that changes electrical energy into sound waves of varying pressure.