Question 4.
Name the advice which gathers the data concerning the temperature from a source.
Answer:
Thermistor.

Question 5.
What is the unit of impedance?
Answer:
Ohm.

Question 6.
Determine ID for the circuit shown below.

Question 7.
Mention the value of the ripple factor of HWR.
Answer:
1.21.

Question 8.
How many ‘pn’ junctions a transistor has?
Answer:
Two.

Question 12.
Find the resistance between A & B.

Question 13.
Write any two applications of an oscilloscope.
Answer:
The oscilloscope can be used to measure

Question 15.
Discuss the charging of a capacitor in an RC circuit.
Answer:

The instantaneous value of current is I = I0e1/RC Time constant (τ) of an RC circuit is the time taken by the capacitor to charge to 63.2% of maximum current. 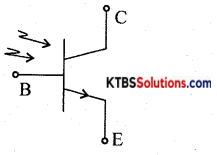 Question 20.
Define the following terms with respect to an AC signal.
(a) Cycle
Answer:
Cycle: AC frequency is the number of cycles per second in an alternating current (ac)

(b) frequency
Answer:
Frequency: The frequency of ac is the number of cycles per second.

Question 21.
Explain the construction of a carbon composition resistor.
Answer:
A mixture of finely divided carbon and a powdered insulating material forms the resistor element. The mixture is more Ided into a cylindrical shape. The proportion of the mixture is adjusted to get the desired value of resistance. Metal caps with leads of tinned copper wire are joined to two ends of a carbon-coated resistor for external connection. As the leads are joined axially from the ends, they are called axial leads. The non-conductive material is coated on the resistor element for insulation and mechanical strength. To specify the resistance of the resistor, a band of colors is marked on the body of the resistor.

Question 23.
Explain with a circuit diagram and graph the growth of current in an RL network.
Answer:

The current 1 at a time after the switch is placed in position A is I = I0e-(R/L)t, where I0 is the maximum current. Question 24.
Derive an expression for the resonant frequency of a series resonant circuit.
Answer:
Consider an AC circuit consisting of inductance (L), capacitor C and a resistance R connected in series to an AC source. Let the instantaneous voltage of the ac source be
v = Vm sin wt

Let VL, VR, Vc be the voltages across the inductor, Resistor, and capacitor. Question 25.
Classify solids based on the energy band diagram.
Answer:

Conductors: These are materials that allow the current to flow through them easily. In conductors, the valence band and conduction band overlap completely due to which the valence electrons drift to the conduction band easily. Even at room temperature, there is a large number of free electrons. Hence due to the small voltage applied a large current flows through them.

Semiconductors: These are the materials with electrical conductivity lying between those of conductors and insulators. The forbidden energy gap between the valence band and conduction band is 0.7 eV for germanium and I. I eV for silicon. At absolute zero, a semiconductor acts as an insulator. As the temperature increases, more valence electrons jump to the conduction band. Hence the conductivity of semiconductors increases with an increase in their temperature.

I. Answer any THREE of the following questions:

Question 27.
Find the branch currents in fig. below.

Question 28.
Complete the following table for the carbon resistor R.

Question 30.
In the circuit shown below find the value of series resistance Rs if Zener current is 10 mA. Question 32.
State and explain the superposition theorem with an example.
Answer:
In any linear bilateral network consisting of two or more independent sources, the resultant current or voltage in any branch ¡s the algebraic sum of the currents or voltages caused by each independent source acting alone, with all other independent sources being replaced by their internal resistances.

Procedure for using Superposition Theorem:
Step 1: Retain the source V1 and replace all other sources with their internal resistances. Question 33.
(a) Derive an expression for the equivalent capacitance of two capacitors connected in series.
Answer: Let the combination be replaced by an equivalent capacitor Cs which has the same effect as the combinations of capacitors. If Cs is the effective capacitance.
then v = \(\frac{\mathrm{Q}}{\mathrm{C}_{\mathrm{s}}}\) →(2)

(b) What are the functions of capacitors.
Answer:
Capacitors are used.

The V-I characteristics can be divided into two parts namely

The circuit for plotting V-I characteristics of the diode is as shown. The resistance R limits the current to a permissible value. A voltmeter measures the voltage across the diode and the milliammeter reads the current flowing through the diode.

Diode current is zero when VF 0. When VF is more than barrier potential, current VF increases. The forward voltage VF at which forward current starts to increase rapidly is called the knee voltage or cut-in voltage or threshold voltage (VK). For germanium diode, VK 0.3 V and for silicon diode, VK = 0.7V.

Due to reverse bias applied on pn junction, an extremely small current ‘R (few μA) flows through the diode. The reverse current remains almost constant up to the breakdown voltage. After this point, for a small change in reverse voltage, the reverse current increases very rapidly. This sudden flow of large current may destroy the diode due to overheating. Hence, the diode should be operated in the reverse bias with reverse voltage less than break down voltage.

Question 35.
What is a filter circuit?
A circuit diagram explains the working of a shunt capacitor filter. Draw the input and output waveforms.
Answer:

Question 37.
Explain with the DTL circuit the action of a two-input NAND gate.
Answer:

Case (i) When both inputs A and B are LOW (0V), both the diodes D1 and D2 are forward biased. Hence voltage at junction P of the diode becomes zero. This makes the transistor Q go to cut off. Hence the output at the collector of the transistor becomes HIGH.

Case (ii) When A is LOW and B is HIGH, D is forward biased and D2 is reverse biased. Hence the voltage at P becomes zero. This makes the transistor go to a cut-off state and therefore output at its collector becomes HIGH.

Case (iii) When A is HIGH and B is LOW, D1 is reverse biased and D2 is forward biased due to which voltage at P is zero. This makes the transistor go to a cut-off state and therefore output at its collector becomes HIGH.

Case (iv) When both the inputs are HIGH, D1 and D2 are reverse biased. Hence voltage at P becomes +V. This makes the transistor Q go to saturation and the transistor acts like a closed switch. Therefore output becomes LOW.