Question 2.
What is NOR gate?
Answer:
The NOR (Not OR) gate has two or more input signals with one output. If all the inputs are 0, then output is 1 in NOR gate.

Question 7.
What is advantage of EDGE?
Answer:
EDGE (Enhanced Data GSM Environment) is a faster version of GSM designed to deliver data at rates up to 384 Kbps and enable the delivery of multimedia and other broadband applications to mobile phone and computer users.

Question 8.
What are dedicated servers?
Answer:
A computer exclusively reserved for server’s job and its only job is to help workstations to access data, software and hardware resources. The term “dedicated server” can also mean a single computer within a network that is reserved for a specific purpose.

Question 9.
What is FSF?
Answer:
A Free Software Foundation (FSF) is a non-profit organization created for the purpose of supporting free software movement.

Question 10.
What do you mean by web scripting?
Answer:
A script is a list of commands that are embedded in a web page and are interpreted and executed by the scripting engine. The process of creating and embedding scripts in a web page is known as web scripting.

Question 11.
Construct a truth table for three variables A, B and C that will have an output 1 when XYZ=100, XYZ=101, XYZ=110, and XYZ=111. Write the Boolean expression for logic network in SOP form.
Answer: Question 14.
Write an example to show the use of parameterized constructors through explicit calls.
Answer:

Question 17.
Explain update command with example.
Answer:
UPDATE command:
It can be used to change row values from a table. The SET keyword takes the column in which values need to be changed or updated. The WHERE keyword is used to filter the records in some conditions.
Syntax:
UPDATE tablename SET columnname = values WHERE Condition;
Example:
UPDATE student SET combn = ‘PCMCs’ where combn=’pcmc’;

Question 19.
Write a short note on SMPS of a computer system.
Answer:
Switched Mode Power Supply (SMPS): The switched mode power supply acting as a DC to DC converter first rectifies an AC input voltage (240Volts), converts it to DC and, chops this DC in a “chopper” and converts it to a higher or lower level of DC (5 to 12 V DC Volts). Typical modern applications include computer power supply and the power supplies in TV and Video sets. The wattage of SMPS is around 150 to 500 watts.
SMPSs are three types :

2. ATX SMPS :
ATX stands for Advanced Technology extended. They had 20pin Power connector, this is called as ATX power connector. They were used in Pentium-III, Pentium- IV and AMD CPUs.

3. BTX SMPS :
BTX stands for Balanced Technology extended. They have 24pin Power connector, this is also called as ATX power connector. It has 15pin SATA power connectors. They are used in Dual core, core2duo, Quad core, i3, i5, i7 and latest AMD CPUs.

Question 20.
Explain the working of NAND gate.
Answer:
This is a NOT-AND gate which is equal to an AND gate followed by a NOT gate. The outputs of all NAND gates are high if any of the inputs are low. Question 23.
Mention the types of files. Explain anyone.
Answer:
The text file and binary file are the two types of files in C++.
Text file:
A text file also called a ASCII file is a stream of characters that can be sequentially processed in forward direction by the computer. In text files, each line of text end with a EOL (End of line) character and each file ends with a special character called the EOF (End of file). The file can be edited using text editors like C++ editor, notepad, vi editors in UNIX.

2. Specialization is a top-down approach in which one higher level entity can be broken down into two lower level entities. Question 27.
Write a short note on queues.
Answer:
A queue is a non-primitive data structure where an item is inserted at one end and removed from the other end. The data structure queue is called FIFO(First In First Out) which means first inserted data item is removed first.

2. Circular Queue :
A circular queue is a queue in which all nodes are treated as circular such that the first node follows the last node.

3. Priority Queue :
A priority queue is a queue that contains items that have some preset priority. When an element has to be removed from a priority queue, the item with the highest priority is removed first

4. Dequeue (Double Ended queue):
In dequeue(double ended queue) Insertion and Deletion occur at both the ends i.e. front and rear of the queue.

5. Operations on Queue:
The queue(), enqueue(item), dequeue(), isEmptyO and size() are the operations that can be performed on queues.

2.  In OOP, data can be made private to a class such that only member functions of the class can access the data. This principle of data hiding helps the programmer to build a secure program.

4. It is easy to maintain and modify existing code as new objects can be created with small differences to existing ones.

The disadvantages of object oriented progrmming:
1. Size:
Object Oriented programs are much larger than other programs. In the early days of computing, space on hard drives, floppy drives and in memory was at a premium. Today we do not have these restrictions.

2. Effort:
Object Oriented programs require a lot of work to create. Specifically, a great deal of planning goes into an object oriented program well before a single piece of code is ever written. Initially, this early effort was felt by many to be a waste of time. In addition, because the programs were larger (see above) coders spent more time actually writing the program.

3. Speed:
Object Oriented programs are slower than other programs, partially because of their size. Other aspects of Object Oriented Programs also demand more system resources, thus slowing the program down.

Question 30.
Describe how objects can be used as function arguments.
Answer:
The objects of same class can be passed as arguments to a function. This is explained with an example, The disadvantages of default constructor are:

b. Implicit Call:
It means the declarationof the object is followed by argument list enclosed in parentheses used with constructors The is used for the parameterized constructor which has exactly one argument. 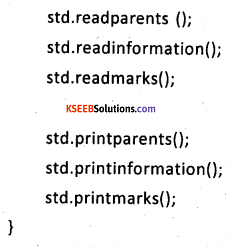 2. UPDATE command:
It can be used to change row values from a table. The SET keyword takes the column in which values need to be changed or updated. The WHERE keyword is used to filter the records in some conditions.
Syntax :
UPDATE tablename SET columnname = values WHERE Condition; Example: UPDATE student SET combn = ‘PCMCs’ where combn=’pcmc’;

3. DELETE Command :
It is used to delete/remove the tuples/rows from the table. All the rows will be deleted if WHERE clause is not used in the statement otherwise it selects the rows for delete which satisfies the condition.
Syntax:
DELETE from tablename WHERE Condition;
Example:
DELETE from student;
DELETE from student WHERE regno=1234; A star topology is designed with each node (file server, workstations, and peripherals) connected directly to a central network hub, switch. Data on a star network passes through the hub, switch, before continuing to its destination. The hub, switch, manages and controls all functions of the network. It also acts as a repeater for the data flow.
Advantages of a Star Topology :

Disadvantages of a Star Topology : A tree topology combines characteristics of linear bus and star topologies. It consists of groups of star-configured workstations connected to a linear bus backbone cable. Tree topologies allow for the expansion of an existing network.
Advantages of a Tree Topology:

Disadvantages of a Tree Topology: