You can Download Chapter 12 Atoms Questions and Answers, Notes, 2nd PUC Physics Question Bank with Answers, Karnataka State Board Solutions help you to revise complete Syllabus and score more marks in your examinations.

Question 1.
Choose the correct alternative from the clues given at the end of the each statement:
(a) The size of the atom in Thomson’s model is ………….. the atomic size in Rutherford’s model, (much greater than/ no different from/much less than.)

(b) In the ground state of …………..electrons are in stable equilibrium, while in electrons always experience a net force. (Thomson’s model/ Rutherford’s model.)

(c) A classical atom based on ………….. is doomed to collapse. (Thomson’s model/ Rutherford’s model.) Question 4.
A difference of 2.3 eV separates two energy levels in an atom. What is the frequency of radiation emitted when the atom make a transition from the upper level to the lower level?
Answer: Question 7.
(a) Using the Bohr’s model calculate the speed of the electron in a hydrogen atom in the n = 1, 2, and 3 levels,
(b) Calculate the orbital period in each of these levels.
Answer:
(a) The speed of electron in the nth orbit of a H-atom is given by

From the equation (i), it follows that the velocity of electron in an orbit of a hydrogen atom is inversely proportional to its quantum number (n).

It follows that orbital period of an electron in H-atom is directly proportional to the cube of its quantum number. Question 11.
Answer the following questions, which help you understand the difference between Thomson’s model and Rutherford’s model better.

(a) Is the average angle of deflection of α-particles by a thin gold foil predicted by Thomson’s model much less, about the same, or much greater than that predicted by Rutherford’s model?

(c) Keeping other factors fixed, it is found experimentally that for small thickness t, the number of α-particles scattered at moderate angles is proportional to t. What clue does this linear dependence on t provide?

(d) In which model is it completely wrong to ignore multiple scattering for the calculation of average angle of scattering of a -particles by a thin foil?

(b) Thomson’s model predicts the backward scattering of a -particles much less than that predicted by Rutherford’s model. The reason is that in Thomson’s model, positive charge is uniformly distributed over whole of the nucleus instead of being concentrated in a small part.

Since the mass of the atom is concentrated in the form of nucleus in Ruther ford’s atom model, most of the scattering comes through a single collision and multiple scattering can be ignored. Hence, when n is large, the frequency of radiation emitted is equal to the classical frequency of revolution of the electron in the orbit.

Question 14.
Classically, an electron can be in any orbit around the nucleus of an atom. Then what determines the typical atomic size? Why is an atom not, say, thousand times bigger than its typical size? The question had greatly puzzled Bohr before he arrived at his famous model of the atom that you have learnt in the text. To simulate what he might well have done before his discovery, let us play as follows with the basic constants of nature and see if we can get a quantity with the dimensions of length that is roughly equal to the known size of an atom (~ 10-10m).

(a) Construct a quantity with the dimensions of length from the fundamental constants e, me, and c. Determine its numerical value.

(b) You will find that the length obtained in (a) is many orders of magnitude smaller than the atomic dimensions. Further, it involves c. But energies of atoms are mostly in non-relativistic domain where c is not expected to play any role. This is what may have suggested Bohr to discard c and look for ‘something else’ to get the right atomic size. Now, the Planck’s constant h had already made its appearance elsewhere. Bohr’s great insight lay in recognising that h, me, and e will yield the right atomic size. Construct a quantity with the dimension of length from h, me, and e and confirm that its numerical value has indeed the correct order of magnitude.
Answer:
(a) The quantity with the dimensions of length constructed from the fundamental constants e, m and c is

(b) The quantity with the dimensions of length constructed from the fundamental constants h, e, and m is the radius of the innermost orbit (n = 1) of the H – atom. It is given by,

It is also called Bohr’s radius
Substituting the values of h, me and 4π∈o in equation (1), (a) Therefore, K.E of the electron in the first excited state (n = 2) of hydrogen atom

(b) E of the electron in the first excited state (n = 2) of the hydrogen atom.

(c) If the zero of potential energy is chosen differently, K.E does not change. The P.E and total energy will change

Question 16.
If Bohr’s quantisation postulate (angular momentum = nh/2 π) is a basic law of nature, it should be equally valid for the case of planetary motion also. Why then do we never speak of quantisation of orbits of planets around the sun?
Answer:
The mass of a planet is very large as compared to that of electron and accordingly, its angular momentum is very large. For \(\frac { h }{ 2\pi } \) example, in terms of the angular, from the
Bohr’s quantisation relation,\(\frac { nh }{ 2\pi } \) it follows that for the orbital motion of the earth, n = 1070. For such a large value of n, the difference in the energies of the successive energy levels are so small as compared to the energies associated with the energy levels that these levels form an energy continuum, i.e the levels appear to be continous.

Question  17.
Obtain the first Bohr’s radius and the ground state energy of a muonic hydrogen atom [i.e., an atom in which a negatively charged muon (μ– ) of mass about 207me orbits around a proton].
Answer:
Let m be the mass of the electron. the firest Bohr radius of H- atom is given by, Question 4.
What is energy possessed by an electron in n = ∞ ?
Answer:
Energy of electron in nth orbit of hydrogen atom is given by 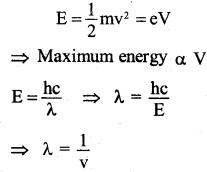