1. Look at the picture given. Can you describe the woman? Who is she ? Where is she from? How does she look? What is her profession? The pictures is of a young, beautiful Indian woman. She was Neerju Bhanot, She was a flight attendant for Pan Am Airways. She was from Mumbai.

Neerja had lost her life while saving passengers of the Pan Am flight that was hijacked by armed terrorists at Karachi airport. It was on February 18, 1911, that the first commercial plane flew in India between Allahabad and Naini. Union Minister for Overseas Indian Affairs and Civil Aviation Vayalar Ravi presented a plaque, shawl, and citation to Aneesh Bhanot, brother of Neerja Bhanot.

Question 3.
Why was she honored?
Answer:
Neerja lost her life while saving passengers of the Pan AM Jet that was hijacked at Karachi airport armed terrorists.

3. You have read a lesson in class V about bravery awards. Do you remember the lesson? Can you narrate one incident of bravery from the lesson?

Neerja Bhanot (born on September 7, 1963 – died on September s, 1986), was a flight attendant for Pan Am Airlines, based in Mumbai, India. She died while saving passengers from terrorists on September 5, 1986. She went on to become the youngest recipient of India’s highest civilian award for bravery, the Ashoka Chakra.

Now, read the lesson and find answers for the following questions:

Question 3.
Who escaped the aircraft why?
Answer:
When the armed terrorists hijacked the Pam Am flight 73, Neerja alerted the cockpit crew. They fled the aircraft so that they would be held hostage and forced by the terrorists could have claimed a huge reason. Later, after seventeen hours, when the terrorists opened fire, Neerja opened the emergency door and helped many passengers to escape.

Question 4.
How did Neeija die?
Answer:
Neerja died while shielding 3 children from a hail of bullets.

C1. Discuss the flouting questions in small groups and answer them in a sentence each:

Question 2.
Why, was the flight described as “ill-fated”
Answer:
The flight was ill took because it was hijacked.

Question 3.
Name the highest civilian award for bravery given by the Indian Government
Answer:
Ashoka Chakra

Question 4.
Name the flight that was hijacked. When and where did this happen?
Answer:

Question 8.
Why is Neerja called the “heroine of the hijack”
Answer:
Neerja, being the most senior cabin crew member on board, took charge of the flight when the other 3 members left the aircraft. Neerja opened the emergency door and helped a number of passengers escape. So, she can well be called the heroine of the hijack.

C2. Arrange the following sentences in an order to make a meaningful paragraph:

C3. Which of the following statements are true about Neeija? Tick them:

C4. Write a small paragraph in your own words, about Neeija?

Women are equal to men, This is proved by Neeija. She was not only brave but also had a very good presence of mind. Future India needs women like Neerja.

C5. Which of the following words are related to airport/flight? Circle them

G1. Find the other forms of the following words from the lesson and write them in the box:

G2. Think of a few more words as above and write their past tense forms. You can refer a dictionary. 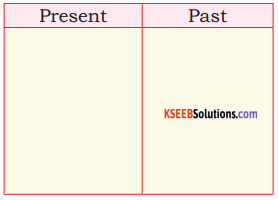 G3. Some words are missing in the following sentences. Add those words and complete the sentences. (One word is missing in each sentence) The given lesson ‘Neerja Bhanot’; Brave in Life, Brave in Death” is about a brave Indian woman who gave up her life to save other people’s life.

Neerja Banot was born on 7 September 1963 in Chandigarh to Rama Bhanot and Harish Banot, a Journalist. She studied at Sacred Heart senior secondary school, Chandigarh, Bombay Scottish school, and St. Xavier’s College, Mumbai. She joined Pan Am Airlines in 1986 as a senior flight purser on the ill-fated Pan Am flight 73.

The PA 73 was hijacked by terrorists on its way to Frankfurt from Mumbai. The flight was still on the tarmac after it had reached Karachi. When the terrorists struck. Neerja alerted the cockpit crew. The three-member cockpit crew – pilot, co-pilot, and flight engineer fled the aircraft. Neerja took charge. The hijackers shot an American.

The terrorists instructed Neerja to collect the passports of all passengers so that they could identify American citizens. As there were 40 Americans on board, she hid the passports. After seventeen hours, when the terrorists opened fire and set off explosives, Neerja opened the emergency door and helped many passengers to escape.

She died shielding three children from the terrorist’s bullets. She is the youngest recipient of the Ashoka Chakra, the highest civilian Award for Bravery. She is recognized as the ‘heroine of Hijack’

The Ashoka Chakra citation states :
“Her loyalties to the passengers of the aircraft in distress will forever be a lasting tribute to the finest qualities of the human spirit”. Share this Karnataka Board Class 6 English Prose Chapter 7 Neerja Bhanot: Brave in life, Brave in Death with your friends to help them to overcome the grammar issues in exams. Keep visiting this site frequently to get the latest information on different subjects. Clarify your doubts by posting the comments and get the answers in an easy manner.