(ii) Motion of a horse pulling a cart on a straight road.
Answer:
Straight line motion.

(iii) Motion of a child in a merry-go-round.
Answer:
Circular motion.

(iv) Motion of a child on a see-saw.
Answer:
Oscillatory motion.

(v) Motion of the hammer of an electric bell.
Answer:
Oscillatory motion.

(vi) The motion of a train on a straight bridge.
Answer:
Straight-line motion.

Question 2.
Which of the following are not correct?
(i) The basic unit of time is second.
Answer:
Correct.
(ii) Every object moves at a constant speed.
Answer:
Not Correct.

(iii) Distances between the two cities are measured in kilometres.
Answer:
Correct.

(iv) The time period of a given pendulum is not constant.
Answer:
Not Correct.

(v) The speed of a train is expressed in m/h.
Answer:
Not Correct. Question 7.
Show the shape of the distance-time graph for die motion in the following cases:
Answer:
(i) A car moving at a constant speed. 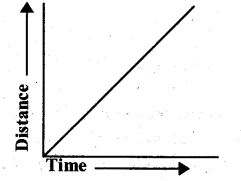 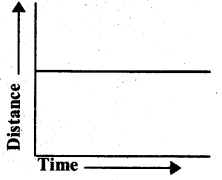 Question 8.
Which of dying following relations is correct?
Answer:

Question 12.
Fig. 13.15 shows the distance-time graph for the motion of two vehicles A and B. Which one of them is moving faster?
Answer:
Vehicle A is moving faster than the vehicle
Speed is given by the relation. 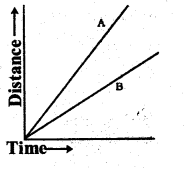 This relation shows that the speed of a vehicle is greater if it covers a greater distances in a given interval of time. To compare the distance, draw a line perpendicular to the time – axis, as shown in the following distance-time graph. 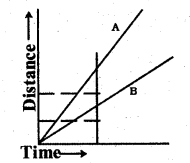 Question 13.
Which of the following distance-time graphs shows a truck moving with a speed which is not constant? Question 1.
What is motion? How many types of motion? Name them.
Answer:
The object or a person transfer from one place to another is known as motion. There are 3 types of motion.
They are

Question 2.
Define speed, what is the unit of speed?
Answer:
The distance covered by an object in unit time is known as speed.

The unit of speed is meter/second.

Question 3.
How do you measure the time?
Answer:
Time is measured by using the oscillatory motions of the pendulum. The clocks and watches are measures the time.

Question 4.
Define the time period?
Answer:
The time taken by the pendulum to complete one oscillation is called its time period

Question 5.
How do you write the symbols?
Answer:
The symbols of all units are written in the singular.
For eg: 60 km not 40 kms.

Question 6.
Name the devices used before the pendulum clocks.
Answer:
Sundial, water clocks, Sand clocks are some examples of devices used to measure the time in olden times.
Different designs of these devices were developed in different parts of the world.

Question 8.
Define speedometer and odometer.
Answer:
A speedometer is a device in vehicles it records the speed of the vehicle directly in kilometer/hour. An odometer that measures the distance travelled (moved) by the vehicle.

Question 10.
Define a simple pendulum, with a neat diagram.
Answer: