You can Download KSEEB Solutions for Class 8 Science Chapter 2 Microorganisms: Friend and Foe Questions and Answers Pdf, Notes help you to revise the complete syllabus.

Question 3.
Match the organisms in Column A with their action in Column B.

Question 1.
What are microorganisms?
Answer:
Microorganisms are living organisms which cannot be seen with unaided eyes, they can be seen only through the powerful microscope.

Question 3.
What are viruses?
Answer:
Viruses are disease-causing agents and are very minute particles visible only under an electron microscope. They are smaller than bacteria.

Question 8.
Name the bacteria used for the production of acetic acid from alcohol.
Answer:
Acetobacter acetic.

Question 9.
What are yeasts? What is their shape? How do they reproduce?
Answer:
Yeasts are (saccharomyces) unicellular and saprophytic fungi. The shape of yeast cells is spherical, elliptical, or cylindrical. Yeast reproduces through asexual mode by budding or by binary fission.

Question 17.
What are communicable diseases?
Answer:
Communicable diseases are those microbial diseases which are spread from an infected person to a healthy person through the air, water, food, or physical contact e.g., malaria, T.B, AIDS, cholera, common cold, chickenpox, etc. 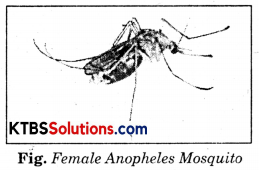 Question 21.
What is a causative microorganism of cholera and typhoid?
Answer:
Bacteria.

Question 22.
What is anthrax?
Answer:
Anthrax is a dangerous human and cattle disease caused by a bacterium.

Question 29.
How food can become a ‘poison’?
Answer:
Microorganisms that grow on our food sometimes produce toxic substances. These make the food poisonous causing serious illness and even death.

Question 30.
What is food poisoning?
Answer:
Food poisoning is due to the consumption of food spoilt by some microorganisms.

Question 32.
What happens when food gets spoiled?
Answer:
Spoiled food emits a bad smell and has a bad taste and changed colour.

Question 34.
Name the bacteria which can fix nitrogen present in the air.
Answer:
Rhizobium, Clostridium, and Azotobacter.

Question 35.
Name the most abundant gas present in the air. What is its percentage in our atmosphere?
Answer:
Nitrogen. Our atmosphere consists of 78% nitrogen gas.

Question 36.
In which form is nitrogen present in all living organisms?
Answer:
Proteins, chlorophyll, nucleic acids, and vitamins. Activity 1
Collect some moist soil from the field in a beaker and add water to it. After the soil particles have settled down, observe a drop of water from the beaker under a microscope.

Question (i).
What do you sec?
Answer:
We see tiny organisms under a microscope.

Activity 2
Take a few drops of water from a pond. Spread on a glass slide and observe through a microscope.

Question (i).
Do you find tiny organisms moving around?
Answer:
Yes.

Activity 3
Take 1/2 kg flour (atta or mauia), add some sugar, and mix with warm water. Add a small amount of yeast powder and knead to make a soft dough.

Activity 4
Take a 500 mL beaker filled upto 3/4 with water. Dissolve 2-3 teaspoons of sugar in it. Add half a spoon of yeast powder to the sugar solution. Keep it covered in a warm place for 4-5 hours. Now smell the solution.

Question (i).
Could you get a smell?
Answer:
Yes, I can smell alcohol.

Activity 5
Take two pots and fill each pot half with soil. Mark them A and B. Put plant waste in pot A and things like polythene bags, empty glass bottles, and broken plastic toys in pot B. Put the pots aside. Observe them after 3-4 weeks.

Question (i)
Do you find any difference in the contents of the two pots?
Answer:
Yes.

Question (ii).
What is the difference in the contents of the two pots?
Answer:
Plant waste in pot A gets decomposed whereas there is no change in contents of pot B.

Question (iii).
How has plant waste in pot A decomposed?
Answer:
The plant waste gets converted into manure by the action of microbes.